Lewis Pugh, the UN Patron of the Oceans, has completed his most perilous swim to date

Pugh, who completed the feat yesterday wearing nothing more than his Speedo swimming trunks, cap and goggles, swam for 10 minutes 17 seconds under the East Antarctic ice sheet to call for the creation of a network of Marine Protected Areas (MPAs) around Antarctica.

The extreme conditions of East Antarctica, which holds the record for the Earth’s lowest recorded temperature, ensured that this was the toughest swim of Pugh’s life.

With water temperatures coming in at just above 0°C, Pugh also faced a severe wind-chill factor and had to contend with the constant threat of the glacial river suddenly emptying out though a crack in the ice and tumbling hundreds of metres to the rock bed below. These rivers lubricate the ice sheet, which causes them to become unstable and surge out into the sea.

“Today was certainly the most frightening swim of my life.

Yesterday's swim was the cumulation of 33 years of training in order to swim 10 minutes and 17 seconds down that river. I swam here today as we are in a climate emergency. We need immediate action from all nations to protect our planet.” 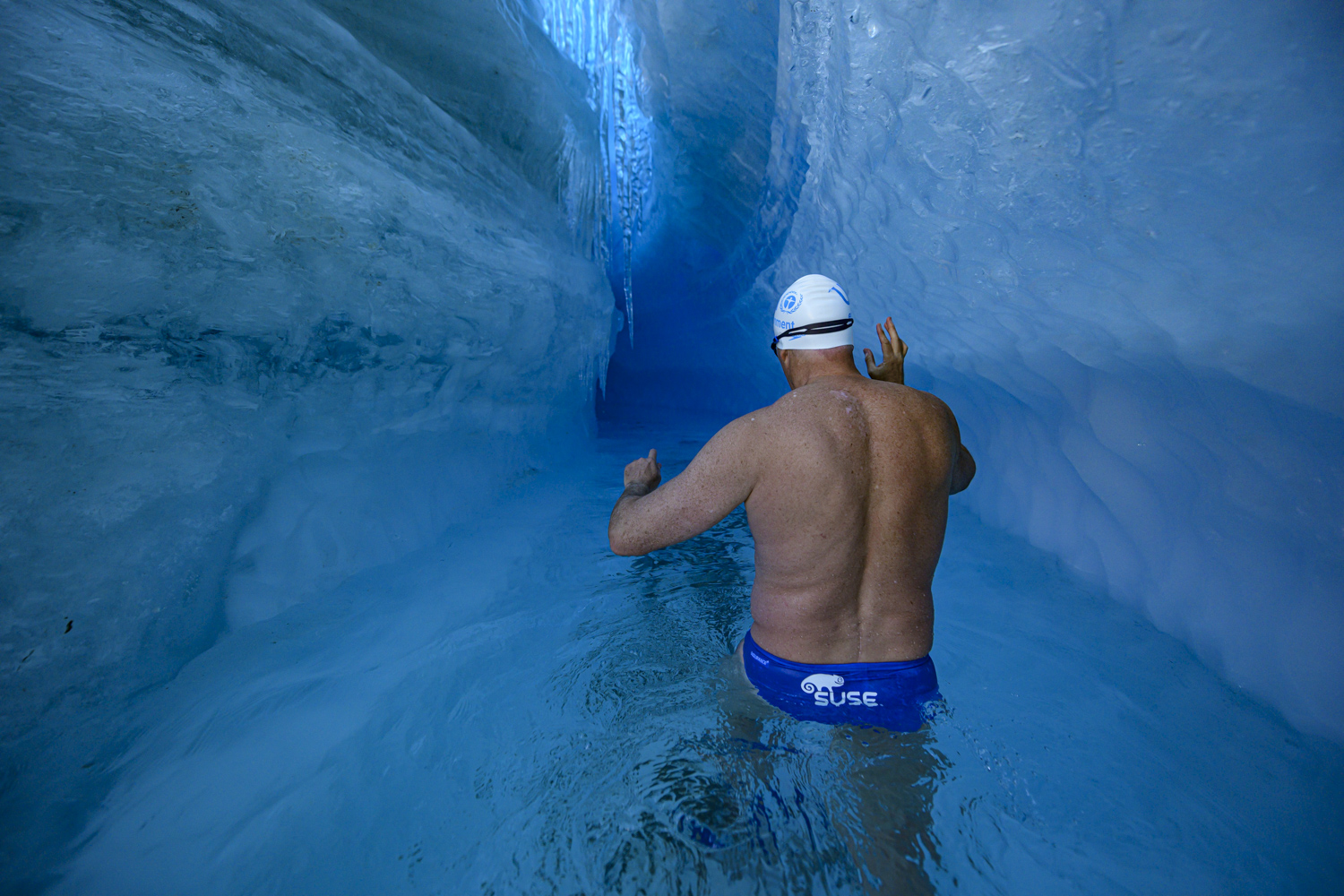 Pugh continued, “I hope that my swim underneath the Antarctic ice sheet will ignite international leaders and lead to the introduction of the Marine Protected Areas this region so critically needs.”

“Wherever I looked there were large rivers of water carving their way through the ice sheet. I have no doubt whatsoever that we are now facing a climate emergency. We do not have 50 years or 20 years or even 10 years to solve this crisis. We have run out of time. The time for action is now."

During his swim, Pugh was flanked by a multi-national support team. Integral to this was Slava Fetisov, the UN Patron of the Polar Regions, ice-hockey legend and former Russian Sports Minister. "I have spent my professional life as a defenseman. Now I am here with Lewis and our team and the mission has never been more critical. The world needs more defenders and protectors. These regions are melting before our eyes. We cannot delay any longer, but must act on this Climate Emergency now."

In addition, Lewis was supported by the former president of Costa Rica and Chairman of the Antarctica 2020 group José María Figueres, who has been working diligently to build consensus amongst the nations directly responsible for protecting Antarctica.

"It has been a truly remarkable experience to be here with Lewis in this frozen and fragile continent. We hope this swim will highlight how this place is right on the edge. We hope that this will galvanise leaders into understanding the issue and securing for the oceans around Antarctica the protection they deserve. We all rely on Antarctica for our survival."

Lewis Pugh's campaigns have been instrumental in protecting over 2.2 million km2 of ocean, an area larger than Western Europe.

Shockingly, a recent study led by Professor Chris Stokes of Durham University found over 65,000 supra-glacial lakes on the East Antarctic Ice Sheet, indicating that surface melting is more widespread than previously thought and occurring much further inland and at much higher elevations than previously observed. Indeed, recent work in Greenland has shown that the development of rivers and lakes is strongly linked to air temperatures and that a warming climate is causing more and more of them to form. 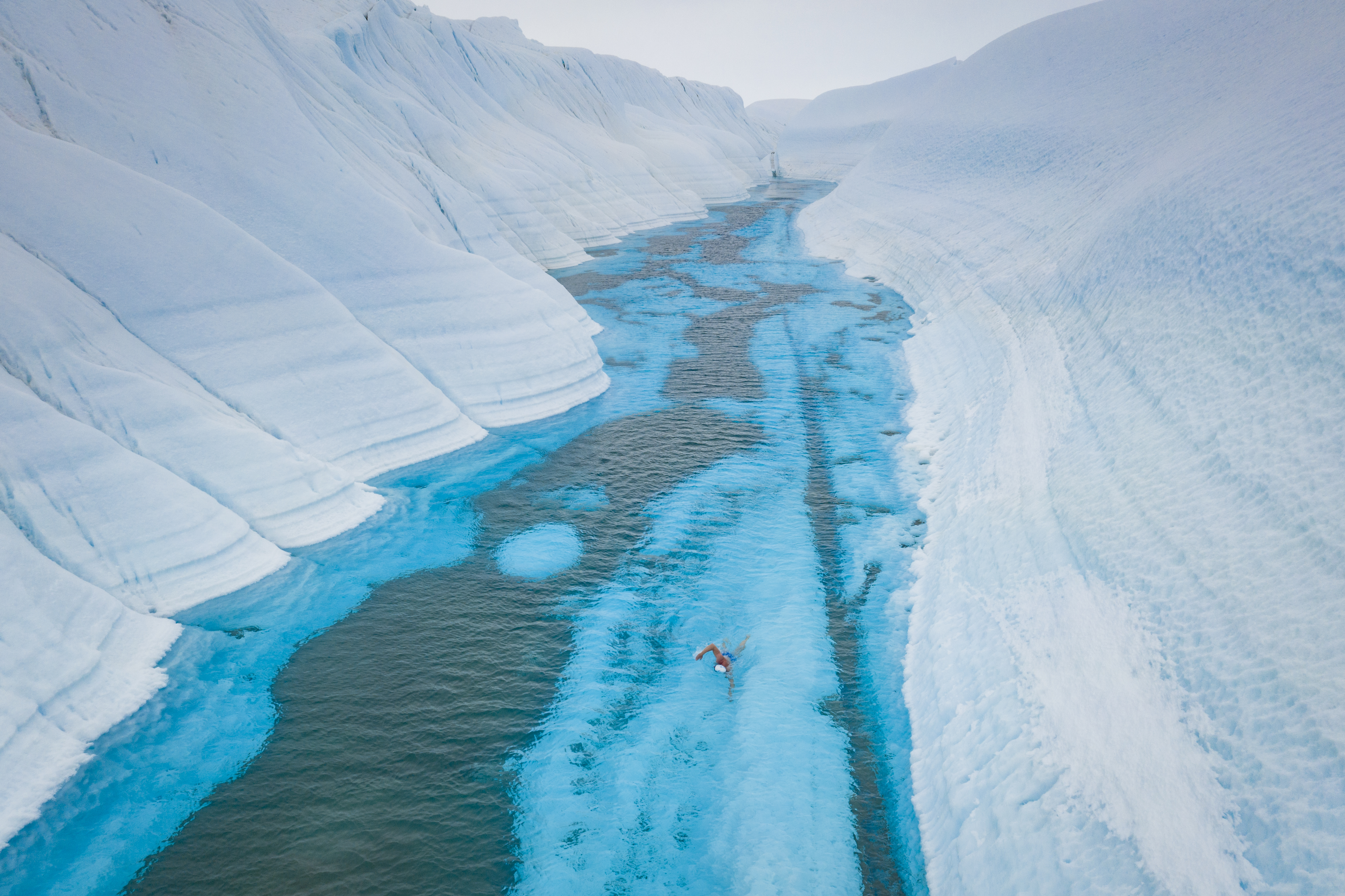 This coincides with recent data that shows that Antarctica lost the same amount of sea ice in the four years between 2014 and 2017 as the Arctic lost in the past thirty years.

“We are facing an existential threat to life on Earth. 2020 must be the year of action. Our futures will now be decided at the COP26 climate change conference in Glasgow in November. We cannot kick the can down the road any longer," says the UN Patron of the Oceans.

Pugh hopes that his swim in Antarctica will be a catalyst for the creation of a network of MPAs in the Southern Ocean around Antarctica, one of the world's last great ocean wildernesses.

MPAs help ecosystems build resilience against the impacts of climate change by protecting them from human activities such as industrial fishing.

In 2016, Pugh was instrumental in the creation of the first MPA in the Ross Sea off Antarctica. At 1.5 million km2 it is the largest protected area in the world – on land or in the sea.

Under international law, 25 nations and the EU have to agree all measures to protect Antarctica. Currently there are three MPA proposals under consideration in the waters of East Antarctica, the Weddell Sea and around the Antarctic Peninsula. To date, all countries and the EU have agreed to the protection of the next MPA in East Antarctica, with the exception of Russia and China. Straight after his swim, Lewis will head to Moscow to hold talks with Russia’s political leadership.

“We are living in a time of very fast change," says Pugh. "I have been swimming in the ocean for over 30 years and I have seen them change dramatically. I have no doubt that we are now facing a Climate Emergency. Ice is melting at an unprecedented rate at both ends of the earth.”

Following completion of the swim, Lewis will now travel straight to Moscow to take part in Russia’s celebration of the 200th anniversary of the discovery of Antarctica. He will hold talks with key decision makers within Russia’s political leadership before travelling to London for a series of media interviews and official meetings.